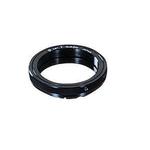 Connector (at camera end)
X
The connector or thread found directly on the camera. With this information, you know whether the camera already fits the telescope, or whether an adapter is required.
Click to read more...