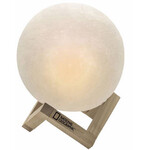 Since its foundation, the company’s aim is ‘to increase and diffuse geographic knowledge’. This principle became the motto of the society and was decisive for the topics covered by the magazine and all the other activities of NATIONAL GEOGRAPHIC.

After more than 120 years, the spirit of the founding fathers is as current as it was then - the commitment to informing the public about scientific advances, in particular insights concerned with protecting our environment, remains its goal.

Since its inception, the work of the National Geographic Society has had two major cornerstones – using the magazine as a communication tool to stimulate research and publish its results; and promoting research projects - more than 9,000 up to the present day.

On the evening of January 13, 1888, 33 honourable gentlemen gathered at the Washington Cosmos Club. The most important item on the agenda was how to ‘increase and diffuse geographic knowledge’. Two weeks later, the National Geographic Society was founded. None of its founding fathers could have guessed that this would one day become the largest organization committed to science and education in the world.

Those men at the Cosmos Club were geographers, geologists, explorers, teachers, lawyers, meteorologists, cartographers, officers and financiers - all educated, travelled and shaped by the pioneering spirit of their time. They were impatient to learn new things, to spread knowledge and to look ahead. Enthusiasts who all wanted to explore the limits. Among them were the discoverers of the Grand Canyon and the first to climb the Rocky Mountains. They were pioneers who had carried America's flag farther north than any other before, researchers who surveyed the remotest mountains and most inaccessible coasts, described unknown flora and fauna and reported on the lives of peoples in distant countries.

Gardiner Green Hubbard was elected president of the company. He was not an explorer, but rather a lawyer and financier who sponsored the scientific experiments of his son-in-law Alexander Graham Bell (who would later invent the telephone and become the second president of the National Geographic Society). In his inaugural address, Hubbard emphasized that membership was by no means limited to scientists, but that the society was open to anyone. What he advanced back then still remains the goal of NATIONAL GEOGRAPHIC today - to support promising research projects ‘and to disseminate this knowledge among the people so that we all learn more about the world in which we live’.