Swarovski Optik is part of the Swarovski group of companies based in Absam in the Tyrol. Founded in 1949, the company has specialized in producing long-range optical equipment of the highest precision, which has won the company a place in the premium segment of the world market.

Their binoculars, spotting scopes, telescopes, opto-electronic devices, telescopic sights, rangefinders and residual light amplifiers are mainly used by professional users (such as fire-watchers in the Canadian forests, researchers in Antarctic stations, air traffic controllers, ornithologists and hunters) due to their outstanding quality. However, the advantages of professional high-end instruments are also becoming increasingly appreciated by non-professionals who enjoy exploring the wonders of nature in their leisure time.

Swarovski Optik has established a special position among suppliers of long-distance optical products, not least because of its strong environmental commitment and its diverse, active contributions to habitat preservation. 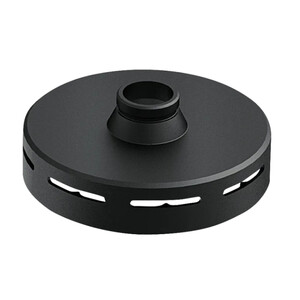 The history of Swarovski began in 1895 with an invention by Daniel Swarovski, who developed the first electrically operated grinder for gemstones and thus founded a family business in the Tyrol whose name has become synonymous worldwide with the clearest crystal glass, precision cutting and brilliant ingenuity.

The company has diversified into several different branches in the more than one hundred years since then - ranging from abrasive tools, cut gemstones and crystal to long range optical devices. These different product lines appear very different from the consumer's point of view, but they are closely related in terms of production know-how and by the constant quest for the highest precision.

Foundation of the company

Wilhelm Swarovski, the son of the company founder, was just 17 years old in 1935. He was an enthusiastic amateur astronomer - his passion for "being closer to the stars," he said, awakened an ambition to build his own, improved, binoculars.

He used the special methods developed in his father's company for the production and processing of glass involved in the production of gemstones for the development of a novel prism production and grinding process, which he used for his first 6x30 binoculars. With important consequences: In 1949 he founded the Swarovski Optik KG in Absam in the Tyrol. His first series product, the ‘Habicht 7x42’, is still a recognised standard in hunting optics.

‘Progress via precision and technology’ - this could also be part of the Swarovski family's genetic code, as their companies have remained faithful to the founder’s principle to this day. The ‘Hawk’ followed as the first collapsible telescope in 1967, the first rubber-armoured binoculars on the world market appeared in 1971, and the first telescopic scope with its own Nova telescope eyepiece technology - to prevent eye injuries when shooting from unfavourable positions - appeared in 1976.

The Swarovski ‘EL’ line was the world's first binocular range with ‘wrap-around’ grip and was awarded the ‘Best of the Best Award’ in 1999 as innovation of the decade. More than 30 national and international awards not only recognize the innovative strength, precision and quality, but also the ambitious design of the brand.

Swarovski Optik employs more than 630 people. In 2005, the company generated sales of 80 million Euros. An export share of 90% is achieved via sales companies in the USA, France, Great Britain, Switzerland, Italy, Germany, Austria, the Benelux countries and more recently in Eastern European countries.

Distributers in 30 countries mean the brand’s product ranges are available on all five continents. With its focus on the highest optical performance, functional innovation and sophisticated design, Swarovski Optik is today has successfully positioned itself as a premium brand worldwide.

(At Swarovski Optik, meticulous quality control is carried out by highly experienced employees.)

The company's success is based not only on its ability to integrate technical innovations into its functionally and aesthetically multi-award winning designs, but also with the company’s philosophy - which clearly emphasises the value it places on an appreciation of nature. This attitude finds expression in nature conservation projects as well as in environmentally friendly production. "Our instruments are used outside in the natural world," explains Werner Trattner, spokesman for the board, and the company’s philosophy is “only an intact natural world ensures humanity’s long-term right to exist."