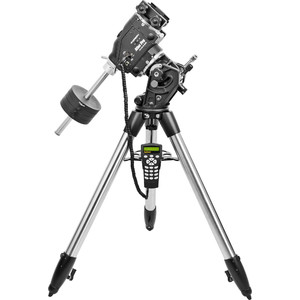 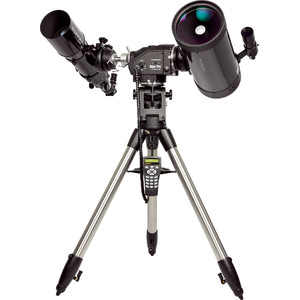 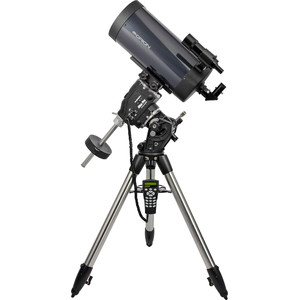 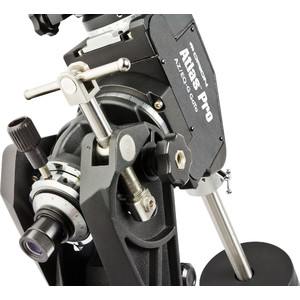 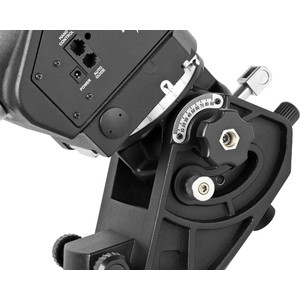 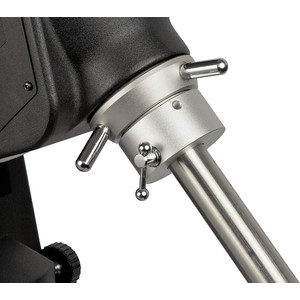 The Orion Atlas EQ-G Equatorial Mount has been a standard in affordable, astrophotography-capable, GoTo mounts for nearly a decade. Now Orion is proud to announce the enhanced, more versatile Atlas Pro AZ/EQ-G GoTo Mount. Certain to become a favorite among intermediate to experienced observers and astrophotographers, this three-in-one smart mount not only operates in equatorial GoTo mode holding one telescope, but also in Altazimuth GoTo & Tracking mode while holding one or even two different telescopes. Control the Atlas Pro via the included illuminated hand controller, or robotically with your PC/laptop, or even wirelessly from your iOS mobile device with optional Orion StarSeek software and Wi-Fi module (sold separately).

In addition to the dual Altaz and EQ modes, the Atlas Pro AZ/EQ-G boasts some other key enhancements, including a smooth yet very robust latitude adjustment for accurate polar alignment, beefier Right Ascension (RA) and Declination (Dec) clutch adjustments, a thicker retractable counterweight shaft - 1" in diameter - and a thread-on shaft extension. The newly engineered equatorial head is a few pounds lighter than the Atlas EQ-G, but will carry a 44-pound telescope payload with ease. In Altazimuth GoTo & Tracking mode with two different telescopes, each side can hold up to a 20-pound telescope. The mount comes standard with an upgraded belt-driven stepper motor drive system that can locate over 42,000 celestial objects of interest with pointing accuracy of 5 arc-minutes and tracking precision of 0.1436 arc-second steps. The drive has closed-loop electronics, with two sets of encoders per axis, meaning that once it is aligned you can manually move the attached telescope to a new target (or accidentally bump into the telescope) and the mount will still know where it's pointing in the sky! What's more, after an inadvertent or intentional nudge, this smart mount can return to its last target or pinpoint any new target you select without requiring realignment.

This is a highly transportable, yet seriously heavy-duty mount; the mount and tripod weigh in at 51 lbs. (without counterweights) and the mount can be uncoupled from the tripod with a single hand knob. Loaded with great features, the Atlas Pro AZ/EQ-G GoTo Mount has a secure, threaded power input jack; a built-in autoguider port for accurate astrophotographic use; and offers 9 different slew speeds (up to 4.2° per second). This performance-packed mount also features Permanent Periodic Error Correction (PPEC). The Atlas Pro's dual-width dovetail saddle accommodates both narrow (Vixen-style) and wide (Losmandy-style) dovetail attachment plates. Along with its sturdy steel-legged tripod, the mount also includes a second dovetail saddle for dual-telescope Altazimuth operations, illuminated polar axis scope with adjustable brightness, two 11-lb. counterweights, RS-232 communication cable, and 12-volt DC power cable with a secure threaded connector. This computerized GoTo mount requires a 12V DC power supply such as an Orion Dynamo (sold separately), or an AC-to-DC adapter with 4A or higher current output. An optional 5-amp AC-to-DC converter is also available (sold separately).

Whether you're seeking a reliable mount for astrophotography or just looking for an amazingly accurate GoTo platform for visual pursuits, let Orion's Atlas Pro shoulder the weighty responsibility for smooth, stable, and smart performance! 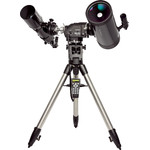 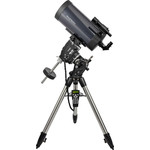