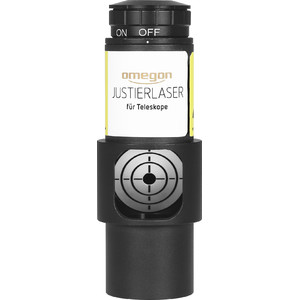 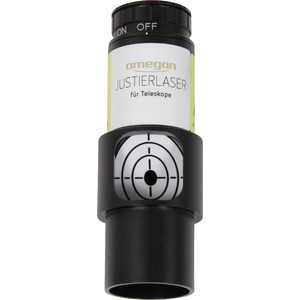 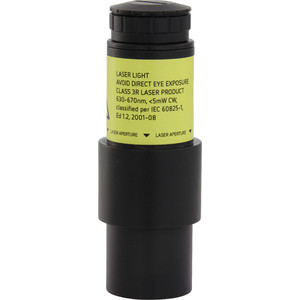 Express shipment possible for delivery the day after tomorrow, 07.10.2022!

Show reviews (8)
Product questions?
advice for Alignment accessories
Log in to add this product to your watchlist.

It is very good.

The product which I received has a red laser and it appears to be of a very good quality. The laser appears to be well centered. It is of a robust construction made of metal. One 2032 coin battery is required to operate the device. The battery is supplied, but it was dead for some reason.

Agree! This is the "Perfect" "Item" for, having a "Perfect" NEWTON!....(Collimated and Clear)! Easy to use..... Perfect result! Recommended!

Best bang for the buck..

It is an extremely easy to use and very good quality product with reasonable price. It helped me to collimate my out of align telescope in just a few minutes.

It is unrelated to the product but have to say that I am very happy with the swift order process, fast shipment and well done packaging.

Its built to a price, but easy to fix

As others have stated, the laser is not perfectly aligned out of the box which does make this "unusable", but it was very easy to align (max 5min, just peel the label to get to the screws) and i have not touched it since. If you're afraid its difficult to do then you probably don't want to get a Newtonian at all.

First one was DOA, second one worked perfect

I ordered this one and it arrived broken, the laser would not turn on and battery was working. Contacted astroshop support and they sent me a replacement, without cost and did not require me to send the defected laser back to them. This is excellent customer support. Meanwhile newest laser is doing it's job as expected.

It does what it says, but it was way out of collimation

Good product for the price, sturdy but mine was waaaay off from being collimated. It made a huge 3-4 cm diameter circle on the primary mirror when rotated in the focuser. I had to build a stand (which was easy, just a wooden plank and 4 screws screwed against each other under 90 deg. angle, so that the laser can lie on top tightly) ... anyways the laser can be collimated, you have to peel off the lable and fine the 3 allen scews. To sum it up, after I collimated it, it does a good job, but I am a bit disappointed that I had to pay 50 bucks for an untrue laser, which I had to collimate myself, on top of that the scews for collimating were glued which made it a bit harder to collimate it. Anyways 3 stars from me.

Just received it. The beam is so off axis that it hits the white target before it leaves the device housing...... well at least adjustment screws are kind of accessible when ripping off the label.
I did not expect 15deg offset from axis and would not recommend this product to others.