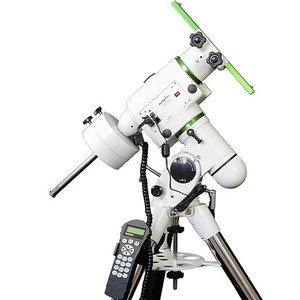 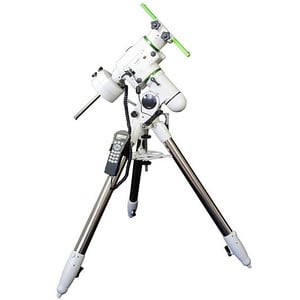 This is the largest and most capable mount made by Sky-Watcher. It has been specially developed to be able to support heavy telescope OTAs of up to 18Kg, stably and vibration-free. This is the optimal requirement for successful astrophotography, which depends on very precise movement of the mount when tracking. It comes in a white design, and already has GoTo control built-in. Virtually no other mount offers better value for money than the EQ-6, making it highly popular among amateur astronomers. Even at the high GoTo speed, the powerful stepper motors on the right ascension and declination axes slew the telescope very quietly, so that your neighbours' sleep will not be disturbed in any way. Quick and effortless alignment with the North Pole for astrophotography is by means of a backlit polar finder.

The Mount comes complete with a GP clamp, as well as with a 3 inch clamp ('Losmandy clamp').

The heavy-duty Sky-Watcher HEQ-5 and EQ-6 equatorial mounts come in three versions: Classic, SynTrek and SynScan. The classic version is the strandard design with no extras, the other versions are known by the suffix 'SynTrek' or 'Pro SynScan'. While in the classic version uses simple DC motors, high-quality stepper motors are used for the upgraded versions. The SynTrek comes with a simple hand control but the SynScan, however, is supplied with a SynScan hand control box with full computer-controlled GoTo functionality.

The SynTrek version can be connected to a SynScan hand control box, available separately, upgrading it to full SynScan capability.