OCULUM Verlag is the only German-language publishing house specialising exclusively in titles for star fans and amateur astronomers. In addition to the bi-monthly Interstellarum journal, numerous successful atlases, books and software make up the publishing programme. 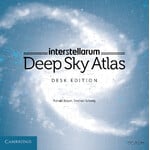 Stefan Binnewies was born in 1960 in Banne-Eickel. After studying human medicine in Bochum, he received his doctorate from the University of Cologne with a thesis on radiology. Stefan works as a pneumologist, a specialist in lung and bronchial medicine, in a private practice. He has been passionate about astronomy since 1977, and soon thereafter specialised in astrophotography and astronomical excursions. In the 1980s he made several visits to the ESO in Chile, followed by numerous trips to Namibia and the Alps. He is currently helping to build a large amateur observatory on the island of Crete.

Michael Feiler was born in Rüsselsheim in 1972. After studying television technology and electronic media, he worked in digital television as a software engineer. Since comet Halley in 1986, Michael has been interested in astronomy and the observation of the night sky. As an enthusiastic Dobsonian owner and Telrad fan, he regularly observes deep sky wonders with his star friends on the summit of the Taunus. He is fascinated by the creation of star charts using the possibilities offered these days by vector-based graphics and drawing programmes.

Peter Friedrich was born in Rüsselsheim in 1962. As a teenager, he began to engage with astronomy and later became interested in observation and astrophotography. He studied physics with a minor in astronomy and received his doctorate in astrophysics at the University of Tübingen in 1994. After several years of scientific work at the Institute for Astrophysics in Potsdam, he has been a research associate at the Max Planck Institute for Extraterrestrial Physics since 2001. Besides the development of mirror systems for X-ray telescopes and cooperation in satellite projects, he is also involved in the observation of active galactic nuclei.

Susanne Friedrich was born in Rüsselsheim in 1963. She has been interested in astronomy since she was young, and observes the night sky both visually and with photography. She studied physics with a minor in astronomy and received her doctorate in astrophysics at the University of Tübingen in 1993. This was followed by periods of research at various German astronomical institutes as well as at the Louisiana State University. She has been a guest at the Max Planck Institute for Extraterrestrial Physics since 2002 and has been working as a freelancer for the Interstellarum journal since 2003.

Thomas Jäger was born in Nuremberg in 1968. The communications electronics engineer studied communications technology and today works as IT project manager for an energy supplier. Astronomy has been his hobby since the end of his schooldays. Struck by aperture fever, he has so far built five telescopes and various electronic devices (CCD camera, mount control, exposure control ...). As a mobile astronomer, he spends many nights observing in the Nuremberg area and occasionally makes astro-excursions into the Alps and around the world.

Bernd Koch was born in Düsseldorf in 1955. As a boy in the early 1960s, his love of the stars was ignited by the Milky Way, still visible from the city at the time. In 1970 with his first telescope and a simple finder camera, his astrophotographic career began, which continues to define his life to this day. After studying physics at the University of Düsseldorf and working for a decade in the field of astrophysics, Bernd founded his photo agency in 1991 which, since 2001, has been based in the Westerwald with its own observatory. He publishes articles, writes books, and is happiest of all when reporting on his specialist field, astrophotography.

Axl Martin was born in Mülheim an der Ruhr in 1968. The physics laboratory technician has been absorbed by astronomy since he was 12 years old. He took his first astrophotos in 1984, in those days still using chemical film. Although he has been using CCD cameras since 1992 and a digital SLR camera for astrophotography since 2003, he still has a penchant for "real” photos. At a private observatory that he operates together with three friends in his home town in the Ruhr area, he is mainly occupied with determining the positions of small planets. Taking "beautiful pictures” is now limited to occasional trips to really dark sky locations, such as Namibia or South Africa.

Philip Noack , born in Frankfurt in 1977, completed his training in advertising sales, then worked with an international news channel in marketing, and continued to study communications. He is currently responsible for marketing for a well-known optics company. Deep sky observation in his leisure time and telescopes in his professional work occupy most of his life.

Thomas Pfleger was born in Oberstdorf in 1964 and has been interested in astronomy since his schooldays in Munich. After studying aerospace technology at the the German armed forces university, he has worked since 1989 as an IT project manager and software developer. His astronomical interests lie in the visual observation of everything that the telescopes at hand can reveal. The possibilities offered by computers in amateur astronomy have fascinated him for many years.

Stefan Schurig was born in Nuremberg in 1978. He has been interested in astronomy since childhood, which he pursues as a hobby together with his astronomy friends from the Nuremberg Astronomical Association. Stephan studied geography, economics and sociology in Erlangen. Both professionally and privately, he is passionate about realising (not only astronomical) projects and ideas with his computer. As a nature lover, he is fascinated not only by the starry sky, but also by the numerous landscapes and cultures of the earth, which he tries to visit as much as possible during his free time.

Lambert Spix, born in Cologne in 1962, studied graphic design after his training as an offset printer, and works as a freelance graphic artist and painter. His first astronomical observations were made in the 1970s at the time of the Moon landings. Today, he is mainly interested in the experiences gained from the telescope and binoculars, and he loves to teach beginners the secrets of star gazing.

Wolfgang Steinicke was born in Mönchengladbach in 1952. He has been practicing astronomy since 1965; starting with visual observations made with smaller telescopes. He studied physics and mathematics at various universities and later was concerned mainly with relativistic astrophysics. He is interested in data from star clusters, galaxies and nebulae and he created a modern version of the well-known New General Catalogue. Another specialisation is the history of astronomy. He publishes many articles, is the author of various books, and is a member of international organizations such as the Royal Astronomical Society.

Ronald Stoyan was born in Dresden in 1972. He studied geography and had the opportunity to spend six months in the Ecuadorian Andes after travelling through Pakistan, India and Mexico. After his return, he founded the OCULUM publishing house in 2000, the first title of which was his book "Deep Sky Reiseführer” (deep sky travel guide). Ronald is the editor of the Interstellarum journal, which he co-founded in 1994, and is the managing director of the OCULUM publishing house.