Orion Optics UK was founded by Barry Pemberton in 1984. At the start, the entire company consisted of just one mirror grinding and polishing machine and was based in a garage. But, by 1987, the small business's reputation had so grown that they had to move to larger premises in Newcastle Under Lyme. The first telescope to be produced there by Orion Optics UK was a 150mm aperture Schmidt-Newtonian.
Today Orion Optics UK is run by Berry's son: John Pemberton. The company is now a major manufacturer of optics - which are used both in its own telescope series as well as in other brands of telescopes - for example Taurus Optics' Dobsonian telescopes. 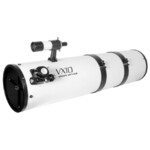 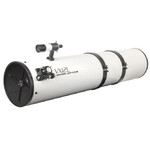 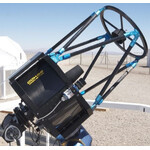 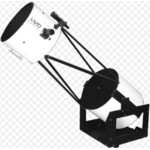 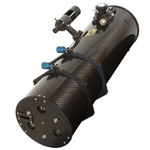 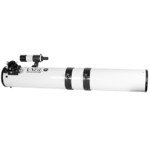 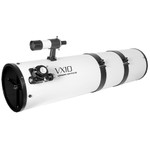 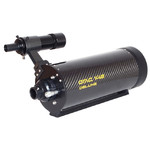 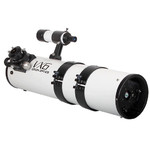 ready for shipping in 3-5 weeks

Barry Pemberton in the year 1961, with his first self-constructed telescope

Orion Optics UK offers a wide range of telescopes - from beginners' right up to professional instruments.
Their VX series Newtonian telescopes are excellent value for money and ideal for beginners or more advanced amateur astronomers.
Their compact and powerful Maksutov Cassegrain design OMC series telescopes are among the best catadioptric instruments available. These lightweight carbon-fibre telescopes are simply a dream for lunar and planetary observers!
Their Astrograph series Newtonians also boast carbon-fibre OTAs. These telescopes have been optimised for astrophotography, making them ideal for every discerning astrophotographer who refuses to compromise!

Type
X
There are basically two different types of telescope. A distinction is made between refractor (lens) and reflector (mirror) telescopes.
Click to read more...

Recommended for...
X
The classification of the telescopes according to their suitability for beginners, advanced or observatories is useful as an initial orientation.
Click to read more...

Type of build
X
Describes the exact structure of the telescope thereby further subdividing the different types of telescope.
Click to read more...

Mounting type
X
Are mainly differentiated between equatorial and altazimuth. A special type of altazimuth mount is the Dobsonian mount.
Click to read more...

Focal length
X
This is the distance between the objective lens or mirror and the focal point.
Click to read more...

Aperture
X
The aperture indicates the diameter of the objective lens or the mirror.
Click to read more...

Tube material
X
Most telescopes are made of steel, aluminium or carbon fibre.
Click to read more...