On the 27th of July, 2018, the time will finally be upon us: our neighbor, Mars, will stand in opposition to the Sun.  Such an event happens every two years, but this time around is something much more special.  The last time Mars was so close to Earth, during opposition, was back in 2003.  This year, the red planet will come within 57 million kilometers, which is about the same distance as 15 years before.  Mars will appear to be about half of the size of Jupiter, something only rarely observable, but with numerous details.

For more info about the Opposition, how to observe, which details to look for and which accessories improve your chances of a rewarding observation, read on below: 1. Mars: The facts about a fascinating planet

With a diameter of 6,000 km, 687 day orbit and a mountain at 27,000 meters – Mars is only half as large as the Earth, but resembles our home very much.  Much like Earth, Mars is home to a rocky surface with mountains, plateaus and canyons.  Valles Marineris is a massive 4,000 km long canyon, with a width of 700 km, and is considered the Grand Canyon of Mars.  Comparatively, our Grand Canyon is relatively small at only 450 km in length and with a 30 km width.

Mars features other similarities, with its polar ice caps and even seasons.  Standing on Mars, you would also see sunrises and sunsets.  You could even see Earth with a telescope.  The planet even features a similar tilt in its orbital path and a day lasts 24 hours and 40 minutes.

What a nice twin, right?  Many space pioneers think so.  And to top it all off, recently NASA revealed clues that the planet was able to support life.  There are, of course, a few disadvantages to lifing on Mars: the cold.  A thick jacket won’t be enough, given that the temperatures drop to -85°C.  Nevertheless, temperatures could reach about 20°C at the equator.

Even the oxygen levels and atmospheric pressure varies greatly: 95% carbon dioxide, 1.8% nitrogen und 0.1% oxygen.  On Earth: 78% nitrogen and 20% oxygen. In other words, breathing on Mars would be suffocating.  Take off your spacesuit and your blood would boil in short time, as if you were at 35 km in altitude above the Earth – 3 times higher than cruise altitude of a commercial jet.

2. The Mars Opposition: What is an opposition?

An opposition occurs, when Mars stands in a straight line with Earth and the Sun.

3. Why only every two years?

Mars orbits the Sun once every 687 days, so roughly 2 years.  We on Earth travel a much higher speed and only require 365 days to orbit.

Imagine that both planets start at the same spot.  The Earth would lap Mars at some point during its orbit.  Given that Mars is also orbiting, one trip around the Sun would not suffice, however.  Only after 780 days will the Earth and Mars be aligned once again.  An opposition!

4. Why will Mars appear to be so large this year?

Mars is pretty conspicuous in the sky this year.  The red planet rises as dusk falls, and will shine bright in the night sky until dawn.  The disk will appear to be enormous!  It will increase to up to 24 arc seconds.  Through a telescope, Mars will appear especially large, meaning we will be able to identify many details on the surface.  It is a unique chance for observers and astro-photographers.  Mars only appeared slightly smaller during the Opposition of 2003.

For observers in the norther hemisphere, the close oppositions will take place below the celestial equator, since they occur in the Summer months.  The planet will not be found high above the horizon, but rather just above it: this year, just 15°.

Mars is bright and an object, that you can see with the naked eye.  It will rise late in the eveing in the south west, climbing ever higher and reaching its meridian on 27th of July, 2018.  Shortly before sunrise, the red planet will once again disappear under the horizon.  You cannot miss Mars, since it will be the only bright object with a very bright and red color.

During the opposition, Mars will be quite large.  That is why you could use just about every telescope to have a look at the planet, even a telescope with a 70-80 mm aperture.  A good beginner’s scope for planets would be the Omegon AC 90/1000 EQ-2.  With an intermediate or large telescope from 150 – 200 mm, you will be able to enjoy a greater resolution, which is important if you want to be able to see the small details.  Keep an eye out that the telescope is well calibrated and adjusted for the temperature outside – important factors for a good, contrast-rich image.  Many observers cherish Dobson telescopes, since they are inexpensive, bright, and easy to work with.

To view Mars, use a magnification of at least 100.  Reason is, the small the planet, the more difficult it will be to see detail.  Shorter focal lengths additionally afford you the greatest magnification.  Magnifications of 200 – 300x are sensible to use.  Hint: high-quality Televue Eyepieces on Sale are available here.

If you have a telescope of 100x, mars will appears only as red ball.  With patience, you should be able to identify the bright, white polar caps.

The most noticeable dark area on the red planet is the Syrte, which is a large, dust-free, and high plateau with a width of 1,300 km.  The area lies close to the equator and should be noticeable with an intermediate telescope.  The Hellas Basin is a large, bright region, found south of Syrte and often home to storms.  Of course, we will only be able to see these two regions, if Mars happens to be sharing this side of itself.  Additionally, white clouds of meteorological phenomena can be seen with larger telescopes and color filters.

A foldable “Mars Map”  from Orion is helpful in preparing for observations and photography.

The ADC Corrector: for more contrast on the horizon

If we observe an object just above the horizon, the object could already set.  The light of the cosmos is often distorted, while passing through the atmostphere or bowed.  We see the same effect, for example, in a glass of water or a straw.  The water is an optically dense medium – just as a straw would in a different way.  Our atmosphere does the same. A Schmidt-Cassegrain Telescope with ADC and a Toupek camera

Is that a problem? Indeed, when we talk about an astronomical object.  Blue and red light is distorted in different ways.  Objects then exhibit a colored edge and appear to be contrast-less.  The images are just less sharp, than those higher in the sky.

The ADC from Omegon produces – if you will – a negative color defect, which works against the atmosphere.  The planet Mars plays a role here.  Mars appears, to float just a bit higher.  When one of our colleagues tested the ADC the first time, he noted, “The effect was massive.  It appeared as if the telescope was suddenly replaced with another.”

In the next few years, many of the planets will be found quite close to the horizon.  But, the ADC is your best hope.  You can use it for visual observations, as well as for photography.  Putting it to use is also quite simple: just place it into the recess, where the eyepieces normally is attached.

The advantages of the ADC in a nutshell:

Color filters are very useful for planetary observations, since they increase contrasts and make many details visible, which you may not see otherwise.  The only requirement is that you should have some experience in observing, because seeing in astronomy is learned.

Color filters are available in sizes 1.25″ or 2″ and are simply screwed into the threads of the eyepiece.

But which details can you see on Mars? 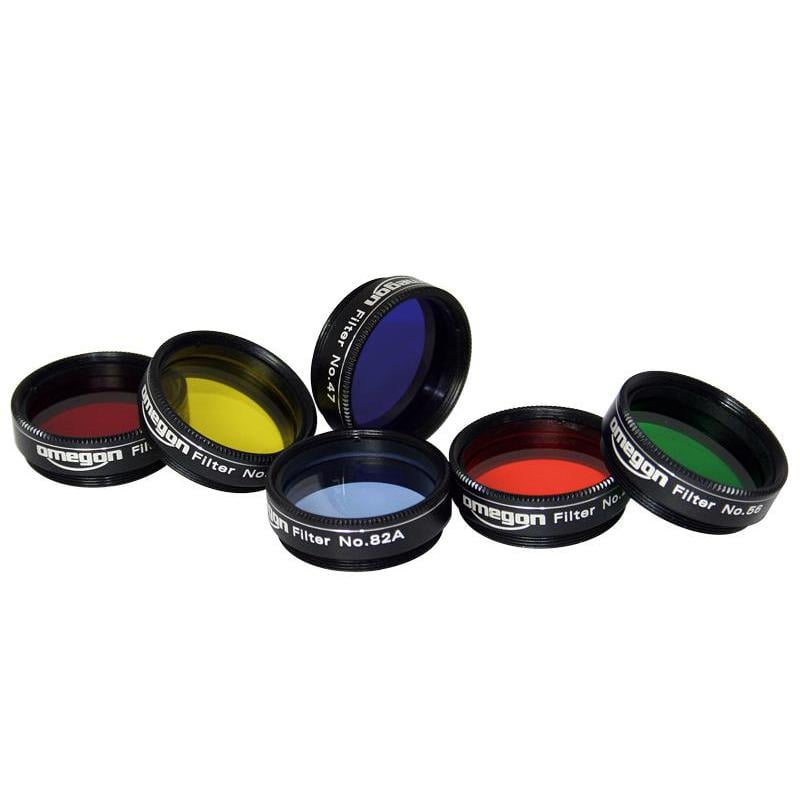 Color filters are screwed directlz into the thread of your eyepiece.

Green filter: with it, you can directly enhance the surface, clouds and freezing fog.

Blue filter: only used for freezing fog and clouds.

Yellow filter: Great for seeing the occasional several week-long dust storm on the surface, by brightening such areas.

Orange and Red filters: Orange filters enhance the bright/dark structures of the surface and are the standard filter for observing Mars. The red filter does the same, but only utilized in large telescopes.

Tip: There are also special Mars filters, which increases greatly the contrasts of the red planet.

Filter wheel: For the quick switch

When you want to use several different filters, we recommend the filter wheel, for a quick switch between filter types.

Do you want to photograph Mars? Then get your hands on a Touptek Camera G3M178C, which offers a high sensitivity and a resolution of 6.4 megapixels.  Plus, it is extremely fast.  With 59 images per second, you can put the shortest moments to use, resulting in sharp images of the red planet.

A great aid for planetary photography, making centering the planet in the dark hours no contest.  With a flip mirror, you can switch between an eyepiece and camera in mere seconds.

Get out and observe!

Don’t wait until the year 2035! This Summer is a great opportunity to marvel at Mars in all its glory.  In contrast to the opposition in 2003, camera technology has come quite a long way.  Instruments like the ADC additionally enable you to view objects on the horizon.  Get your telescope read and have a look at our nearest neighbor this Summer!

Product tip: Want to show your enthusiasm? Then get your hands on the Mars T-shirt!  The backside features all the info of the opposition: distance, size, and brightness.  Order now! 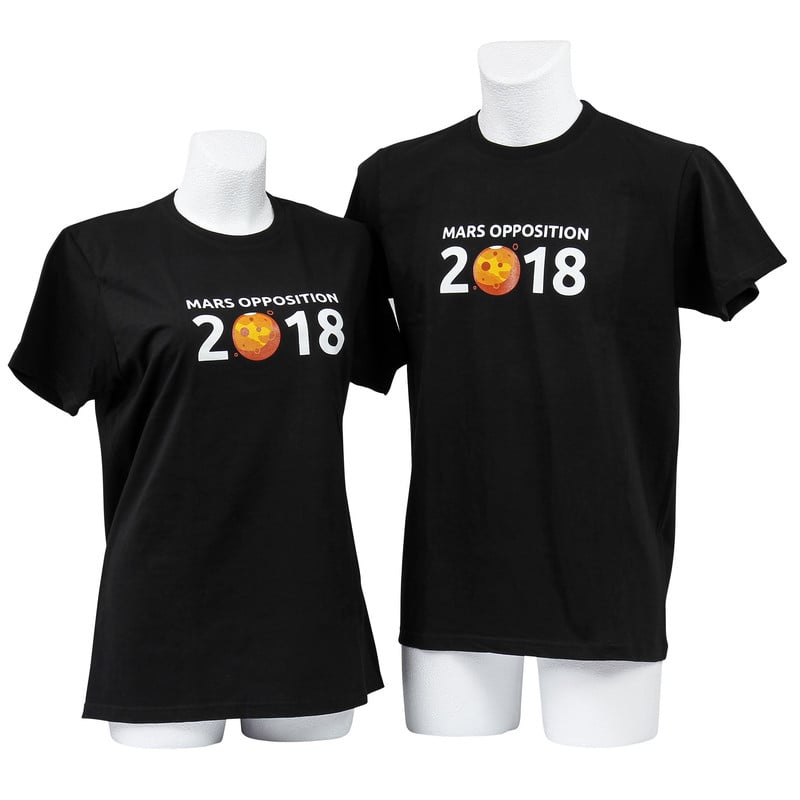