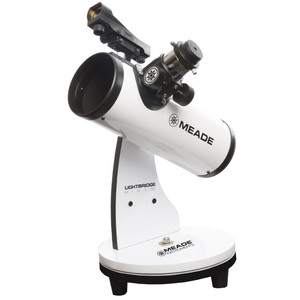 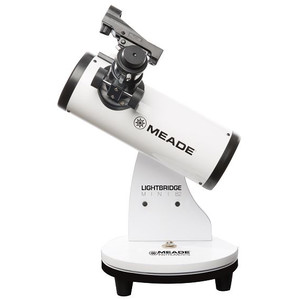 A compact, optically-fast telescope for astronomers that is easy to transport and simple to operate. It is a so-called 'Dobsonian' telescope. This type of reflecting telescope is very easy for beginners to use and collects a lot of light from astronomical objects.

This Dobsonian reflector telescope comes fully assembled. It can be simply placed on a table for you to immediately get started with your space exploration. Extensive accessories are provided for getting started as simply as easily as possible with your star-filled fun.

A special feature of this Dobsonian telescope is that the OTA is connected to the single-armed mount via a prism rail (swallow-tail). As a result, the OTA can not only be removed for transport, but also be attached to any other astronomical mount equipped with a prism-rail. It is also easier to balance the telescope - something which is especially important with Dobsonians.

It is not only important which telescope you buy, but also where you buy it.

I attended dozens of local astro gatherings in the past, but somehow never bought a telescope for myself. So now when I'm older and have a 6 year old daughter which shows great interest in the night sky and nature in general, I decided to give it a go together and bought this telescope for both me and my daughter (and wife) as a first scope hoping that we will have a shared hobby for years to come.

The scope comes in double box, secured with foam inside and it is very securely packaged. The scope is basically preassembled and the only thing you have to attach, apart from eyepieces and barlow, is the red dot finder which takes 2 minutes. Once attached, I calibrated the red dot using the lamp in may park and after 10 minutes everything was ready for observation.

The scope, when you fold the tube upright, takes very little space, and it fits very nice into plain grocery bag (not even a big one), so at the first opportunity I put the telescope into the bag and took my wife and daughter to local hill accessible by car (1050m) for our first observation. You can use it from your terrace or the balcony, but the autumn/winter in Zagreb/Croatia where we live is very foggy for very long periods of time, so we took a little trip instead.

Once we arrived to the hilltop, which is popular tourist site, it was 18:30 and since the Sun was already set more than 2 hours ago there was almost nobody there so we used the restaurant terrace for observations. The scope was set on the table, and after not even a minute we started observing the Moon, and little after a few stars and the Pleiades while sipping the hot tea from the bar (they even provided blankets).

The daughter and wife both went "whoaaaa" when saw the moon the first time through the telescope, and we spent looking at it for more than an hour using the various magnifications using the 2 eyepieces and the Barlow included in package.

The best setup for the Moon is 2x Barlow + 26mm EP giving you the 23X magnification with the Moon filling up approx. half of the viewfield through the eyepiece with strong and crispy details on the terminator craters (the first thing my daughter said, after whoooa, is "look Ma, a crater") with no visible and distracting optical artefacts whatsoever. The focuser is adequate so is the azimuth rotation, but I had some problems with alt settings since it is tricky to get it just right so you can adjust by hand.

When using maximum 66x magnification (9mm EP + 2x Barlow) the Moon disk does not fit inside the viewfield but you can observe approx. 3/4 of it at the same time. The image is dimmer and the filter is not needed and you can see craters on the terminator in greater detail, but since you must put your eye so close that your eyebrows touch the EP we didn't use it much since my daughter is too small and she can't observe the Moon in this setup for much before she moves the whole assembly with her head.

The factory collimation is good, but not perfect, which I confirmed watching several stars. However, it is adequate for the scope of this size (I'll try to perfect it as soon as I get my hands on a collimator, but non issue really). The Pleiades caused another "Whoaaa" from my daughter (using the Barlow and 26mm EP) and we are for sure to observe them the next time, but since it was very cold (-2°C), all planets were under the horizont (other than Uranus and Neptune which I couldn't locate and are too small anyways) and it was getting late (past 21:00) we headed home very satisfied with our first astronomical experience.

If you have doubts about starting a new hobby for yourself, or even better, for the whole family, go purchase this product and give it a go because it is so cheap for a real telescope (a real instrument, not the department store model). Even if you decide to give it up afterwards, you can always resell it to another beginner or use it as a decoration at home. However, if you really have the passion for the astronomy, once you look through this little scope, you will know it for sure.

- No previous experience needed
- Great optical quality for what this scope is
- VERY portable, compact and sturdy
- Cheap if you give up the astronomy eventually, VERY cheap if you don't
- Looks very nice at home as a decoration if you do give up astronomy :)

CONS (when being too pedantic):

- The tube cover fit is too snug, and when I pressed it into place by force 2 plastic pin holders broke off. (Not important since its still very snug)
- The focuser produces weird noises when turned - the littel tube is wrapped in something like aluminium or mylar foil and it is slightly bending when sliding in&out. I don't think it will be a problem.

The Barlow and EPs housings are indeed plastic, but the optics is more than adequate. However, I cannot count the plastic as a CON because of the very low price achieved exactly because the usage of plastic parts. In addition to that, I can confirm that the tube and the primary and secondary mirror are of hight quality and at this aperture it doesn't suffer much artifacts due to its spherical nature (I'm not even sure the primary is spherical because I didn't notice anything major during the first observation and perhaps because I never looked through telescopes with spherical mirrors before so I didn't know what to look for.) That being said, I think the the tube and the mirrors would for sure benefit from higher quality eyepieces and barlow so I plan to purchase better in the future because the scope can handle higher magnifications. I will purchase high quality 3x Barlow and 6mm SP Eyepieces giving me about 150X magnification which is IMHO the maximum you can achieve with this little scope and still be useful.