The binoculars made by the former ZEISS-Jena combine have been marketed under the brand name DOCTER for some years now. The quality of these made in Germany instruments is excellent. The manufacturer focuses entirely on excellent optical quality at a fair price. 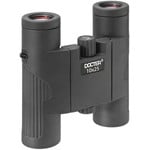 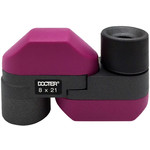 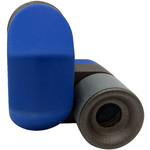 The history of binoculars is inextricably linked with the name of Carl Zeiss Jena – to which our product history also harks back. The class of instruments known as binoculars, as the most commonly used type of terrestrial ‘telescopes’, now has a tradition of more than a 100 years. Carl Zeiss Jena laid the foundation stone for binoculars in the form in which we know them today on July 9, 1893 with German Imperial Patent Office patent No. 77086 for ‘A Double Telescope with Increased Objective Lens Distance’.

Carl Zeiss Jena had a decisive share in the subsequent rapid development of this product. 10,000 prism binoculars had already been produced there by 1900. In the 1930s and 40s, the development of visual observing and targeting equipment reached a climax due to the accelerated development of armaments during the Second World War. It offered a very large range of equipment, which was further expanded during the war years by numerous military models. Aspherical optics and magnesium housings were already in use by this time.

History of the company after 1945

At the end of the Second World War, many key employees left the plant in Jena and large parts of the factory were dismantled. The binocular product range was heavily ‘revised’ after the recommencement of production in the years following the war, and concentrated on the tried-and-tested 7x50, 10x50 and 8x30 models, which were produced at a rate of up to 200,000 instruments per year.

VEB Carl ZEISS JENA was established in Eisfeld in 1952 as a part of the company. Building on its experience as a supplier of individual parts and intermediary products for the Carl-ZEISS-Werke in Jena, the company gradually developed a role over the following years as a producer of precision mechanical-optical consumer goods and industrial products.

In the 80's, the expansion of its capacity for producing of binoculars and optical analysers led to the development of new generations of optoelectronic measuring devices and to the expansion of its binocular and telescopic sight ranges by the development of new products and the refinement of existing products. Its position as the largest European binocular producer was able to be consolidated and expanded. There were about 1,100 employees working in Eisfeld and about 300,000 binoculars and telescopic sights were produced per year.

Jenoptik Carl ZEISS Jena GmbH’s Eisfeld plant, with 550 employees, was taken over by Mr. Bernhard Docter On August 1, 1991, who gave his name to the plant and the product range. The company now appeared on the market as DOCTER-OPTIC-EISFELD GmbH and continued its steeped-in-tradition production of binoculars, telescopic sights, spotting scopes, magnifiers and optoelectronic measuring instruments.

As a recognized producer of blank-moulded aspheric lenses, one important goal in the company's strategy was to promote the use of aspheric lens elements in imaging optics. These were first used in the eyepiece of their 8x56 telescopic sight and in the eyepieces of their NOTAREM straight-view binoculars. After some initial difficulties, the process of blank moulding was able to be optimized for use in mass production. Larger quantities of aspheric lens elements were also used in the newly created ‘Spotlights product category’. Here, it was the battery-powered compact spotlight which was particularly important.

Overall, there was a strong expansion of the range, especially in telescopic sights, which were also supplemented by instruments that used an illuminated reticule. The finish was significantly improved on many products. It should also not be forgotten that great efforts were made to guarantee, and to constantly improve, product quality via improvements in production and technological development.

On November 15, 1995, the DOCTER-OPTIC company in Wetzlar filed for bankruptcy for the entire company. The bankruptcy was administered under the direction of Dr. Ing. Wellensieck, as a result of which the majority of the company was sold to a consortium consisting of Bosch and Hella under the management of Rodenstock. The Eisfeld operation continued to operate with about 230 employees under bankruptcy conditions while prospective buyers were sought. It was always the ‘preferred solution’ that the company be sold as a whole. Over 30 interested parties were involved in the discussions that were held. A contract was drawn up with American company MMTI, but this was never finalised due to non-payment of the purchase sum agreed. The closure of the Eisfeld business was announced on 15 April 1997 after further unsuccessful efforts by the bankruptcy administration.

From May 1, 1997, part of the company, with a workforce of 40 employees, was subsequently run by ANALYTIK JENA GmbH, which traditionally had good relationships with its workforce. Very good sales figures and progress were already being accomplished in the first year after the acquisition. Hard work by the marketing and sales staff meant full order books, and the majority of specialized trade and industry partners - who had been unsettled by the uncertainty surrounding the DOCTER plant - were reacquired as customers. The number of employees at the Eisfeld site has grown to almost 100 again in the meantime.

Particular attention has been paid to the DOCTER product range, which continues to focus on high quality, good value for money, perfect customer value and well-balanced design. It goes without saying that the need for innovation with the Eisfeld products is being furthered by the synergistic effects that have now become possible. The aim is to make the DOCTER binocular model range more suitable for their various applications. The popular DOCTER telescopic sights for hunters now come equipped with modern, powerful optics that guarantee secure handling and high accuracy.

With the laying of the foundation stone for a new company building, in which all the production areas were brought together, on 27 May 2005, all the important conditions have been created for the successful operation of the Eisfeld company for the future.

In May 2015, binocular and telescopic sight production was acquired by Noblex GmbH under the brand name DOCTER.