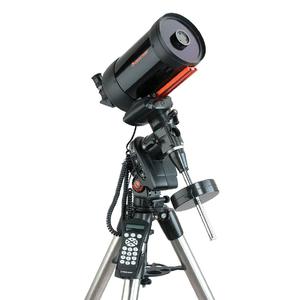 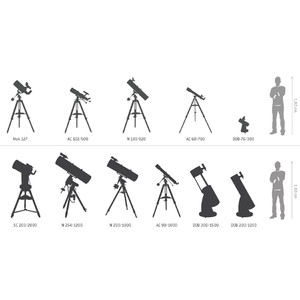 Despite the long focal length of these telescopes, the OTA itself has a very short length, making the system a compact telescope which is extremely easy to transport. Light first hits an aspherically figured Schmidt corrector plate and is then thrown onto a spherical main mirror. This reflects the light back up, throwing it onto a secondary mirror which subsequently throws it back in the direction of main mirror. The light then passes through a central hole in the main mirror and into the focuser at the bottom of the OTA. Thus the system is closed and hence does not suffer from air turbulence which could degrade the image. Of course this also means that the system is optimally protected from dust. The Schmidt plate is multi-coated, ensuring bright images which do not suffer from stray light reflections.

This telescope provides a very good image, boasting high contrast and definition and provides a lot of pleasure when planetary observing. The Schmidt-Cassegrain design provides a good all-round system suitable for both observing and astrophotography and with an enormous range of optional accessories available. Using the bottom end of the OTA to look through means easy orientation. The system is also optimal for occasional terrestrial observing, e.g. birdwatching at close range. Celestron SC telescopes have an aperture ratio of around 1:10 which, so astrophotography is also very easily possible.

Main mirror focusing means a very large range of focus is made available, which allows virtually any common accessory to be used. Two pre-loaded ball bearings are used in the main mirror focus positioning mechanism in order to prevent 'mirror shift' - a typical problem when using simple bushings. The use of high quality materials such as CNC-milled aluminium components, cast steel and stainless steel guarantees extreme robustness with low weight. This means that a very heavy mount is unnecessary, not always the case for other telescope designs.

Features of these telescopes:

Included in delivery with the telescope:

The smallest large German equatorial mount from Celestron. Since the invention by Joseph von Fraunhofer of this type of mount circa 1810 it has been known worldwide as the 'German equatorial mount'. It is noteworthy that, over almost 200 years of use, almost nothing has changed in the design and nothing could be significantly improved. For astrophotography, the German mount is almost a 'must'!

The biggest advantage of the 'German mount' is its flexibility. Unlike fork mounts, it is not limited to a particular telescope! Depending on your fancy, the air quality and the celestial target, you can attach a different OTA onto the same mount in a matter of seconds and balance it by moving the counterweights and telescope OTA so that the drive motors can very precisely compensate (precise enough even for photography) for the rotation of the Earth using extremely low power. Purchasing a Celestron AS (Advanced Series) telescope therefore always means getting an initial 'telescope-system' which does not have to be immediately extended with a mount and stainless steel tripod.

Celestron AS mounts are characterized by their extremely high carrying capacity. Many amateurs use telescopes of up to 13 kg in weight on them without any tracking problems - even for astrophotography. The high rigidity of AS mounts is due to the very thick-walled cast aluminum housing and to the two large ball bearings on the so-called 'hour axis'. The size of the head bearing is that of a car's wheel bearing (to which it is very similar). The load carrying capacity also depends on the tripod construction. Heavy die-cast aluminium and stainless steel tubes give the height-adjustable tripod many times more torsional rigidity than the aluminum tripods that have often been used for this class. A metal accessory tray connected to the tripod legs absorbs vibrations most effectively and has room for up to five 1.25" or 2" eyepieces. Next to high stiffness and precision positioning, the most important thing is the combination of worm gear and worm wheel - which is actually the heart of the mount's drive. For the advanced mount (without GoTo electronics), this is a combination of bronze worm gear and aluminum worm wheel; an ideal solution for beginners who already want to use 'heavy equipment'. Both drive worms are equipped with ball bearings and meet all the needs of experienced astrophotographers, not least thanks to the sophisticated NexStar electronics, programmable hand-held controller, and sophisticated control electronics for the servomotors. The NexStar AS GT hand controller electronics are lacking in nothing, they even have a 'PEC function', i.e. permanently programmable control of residual tracking errors to arcsecond accuracy, indispensible for perfectly synchronous tracking for astrophotography.

Included in delivery with the mount: